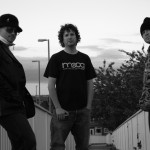 The Dookie Squad met at School in 1988. BDP had just releases By All Means Necessary and National Fresh was playing all the latest Hip Hop on Radio 1 courtesy of Jeff Young. Dook Tha Looper was taking samples from some of Mr Memory’s rare vinyl funk grooves and creating rough beats whilst Mr. Memory and Alikazam were writing rhymes to go with them.

In early 1994 The Dookie Squad had their first tour of Germany courtesy of Blue Eyes (Mick Mott) and the 5 Event tour included Venues of 1000+ people and was supported by other UK Hip Hop artists including Brain Child and Fixed Penalty.

In late 1994 their First EP, 6ft Under was released and feature D.J. Life (AKA Rob Life) and received an excellent review in Hip Hop connection magazine.

The Dookie Squad are still regularly gigging around the UK and Europe and if you’ve never seen one of their live shows, then it’s definitely one not to be missed. 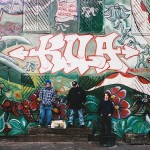 It’s been almost 20 years since the last release..

..but now the Dookie Squad is back on wax!
After their impact with the ‘6 Feet Deep EP’ in 1994, Alikazam, Dook Tha Looper and Mr. Memory are now hitting the streets with another 3 bangers.

Dookie Squad is one of the crews that had such an impact on the scene with one release only and this one might become another classic in the music we love!

‘Deep Rising’, ‘Non Specific’ and ‘Hostile Action’, the latter with a slightly different version to the version that appears on the Underground United Volume 2 LP – those are the tracks on the vinyl only release that comes on red wax.

Truly a must have for you Hardcore Hip Hop lovers out there..