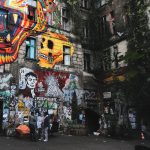 Last night we played at Kopi Squat in Berlin along side Projext C with Specifik, Whirlwind D with Specifik and Killa Instinct.

Upon arrival, the Kopi Squat building looked intimidating with political messages, squats and lived in caravans surrounding the main construction.

As we walked through the gates to the main courtyard of this impressive building, we were greeted with a warm welcome by the people running it.

They had prepared us some amazing food and the bar was free all night for all performers. 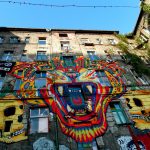 We had been pre-warned by our promoters that we were not aloud to take any photos inside or outside of the venue whatsoever.

Bandog from Killa Instinct informed me that the last time they played at the Kopi Squat a few years before, one guy had the shit kicked out of him for taking photos in the venue so even though I wanted to share my memories of this epic venue, I valued my teeth a tad.

You are very aware that the laws of the land are left outside the gate upon arrive and there are plenty of messages around the walls of the building informing you of their laws:

Simple rules that couldn’t be broken even though I did see a few sweaty gurners and the occasional smell of weed but apart from that, it worked.

There were no shots sold from behind the bar either keeping the punters sober enough to not cause trouble.

Such a great atmosphere in this venue. During the set people were moshing on the dance floor but all had smiles on their faces.

Can’t wait to go back there and play again.